Memorial to Richard Clutterbuck and family

initials TC on the parish chest may be those of
his son Thomas (d.1614) or his great-grandson
Thomas, churchwarden in 1682. A number of
owners of Stanley House and Mill have served
as churchwardens, notably Jasper Clutterbuck
in the later 1750s and William Marling in the
1860s and 1870s. 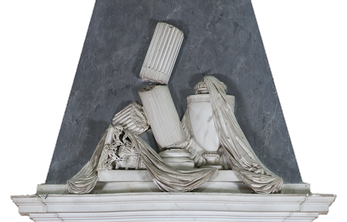 In the 16th century Kings Stanley
was already an important cloth-making centre:
Stanley Mill, the site of a mill since Domesday
book was bought by Richard Clutterbuck in
1579. He began the building of nearby Stanley
House which was completed in the early 1590s.
House and Mill were passed down to Richard's
descendants and their relations until the end of
the 18th century and were then, after various
ownerships, bought by Nathaniel Marling 1841
and sold onto his brother Samuel in 1854.
Samuel Marling and his son William were
important employers and benefactors in later
Victorian times.
The initials EC beneath the sundial on the
exterior of the south aisle may refer to Richard
Clutterbuck's widow Elizabeth, while the